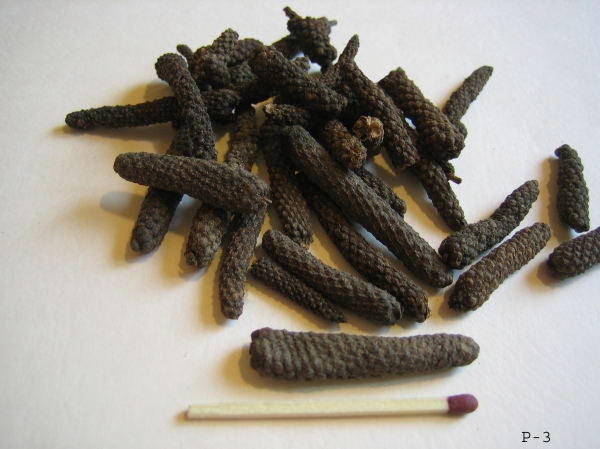 Scientists at the Broad Institute and Massachusetts General Hospital (MGH) have discovered a novel compound that blocks this response to oxidative stress selectively in cancer cells but spares normal cells, with an effectiveness that surpassed a chemotherapy drug currently used to treat breast cancer. Their findings, based on experiments in cell culture and in mice, appear online in Nature on July 13.

The plant-based compound piperlongumine (PL), derived from the fruit of a pepper plant found in southern India and southeast Asia, appears to kill cancer cells by jamming the machinery that dissipates high oxidative stress and the resulting ROS. Normal cells have low levels of ROS, in tune with their more modest metabolism, so they don’t need high levels of the anti-oxidant enzymes that PL stymies once they pass a certain threshold.

Synthesis, cellular evaluation, and mechanism of action of piperlongumine analogs

Nearly 30 years after auranofin gained approval from the U.S. Food and Drug Administration to treat rheumatoid arthritis, researchers are repurposing the drug for a possible new use: chronic lymphocytic leukemia (CLL). Moreover, the arthritis drug could emerge as a model for accelerating patients’ access to other repurposed drugs or for rescuing drugs that the pharmaceutical industry has abandoned and now are languishing on companies’ shelves, researchers say.

“What we did was go from in vitro experiments directly into patients,” said Scott Weir, Pharm.D., Ph.D., director of the Institute for Advancing Medical Innovation at the University of Kansas Medical Center, one of several test sites nationwide, which soon will include the National Heart, Lung, and Blood Institute.

“We didn’t feel we needed to go through the traditional drug paradigm,” he said, given auranofin’s earlier testing for safety and efficacy.

As a result, less than 2 years after scientists discovered that auranofin could kill CLL cells in the lab, researchers began dosing the first relapsed CLL patient in a clinical trial. That compares with, on average, 8–10 years to reach a similar stage in drug development for a new drug, according to Weir, one of several authors of a recent commentary in Cancer Research about the pilot project.

The repurposing of older drugs such as auranofin, as well as second looks at unapproved agents stuck in the regulatory pipeline, is part of an intense systematic approach to translational research embodied in the first new center at the National Institutes of Health in more than a decade. The National Center for Advancing Translational Sciences (NCATS), which replaced the National Center for Research Resources earlier this year, incorporates many of the former center’s programs.

Video originally posted by Genentech. From their site:

Bcl-2 is overexpressed in several hematologic malignancies, including non-Hodgkin’s lymphoma. Preclinical studies demonstrate that Bcl-2 acts as a key regulator of the intrinsic apoptotic signaling pathway by sequestering and neutralizing pro-apoptotic molecules, such as Bax.7 Thus, the anti-apoptotic protein promotes B-cell survival by inhibiting apoptosis, which may result in oncogenic chemotherapy resistance in hematologic malignancies”.

This cool image is also Genentech’s.

“Zhong et al focus on a different facet of BCL-2, the BH4 domain that is involved in the interaction with IP3R. Using an oligopeptide derived from a site on IP3R found to be involved in binding BCL-2, the authors had previously demonstrated the ability to disrupt the BCL-2:IP3R complex and alter calcium signaling. This current report is noteworthy in two ways: first, it reports a modification of the peptide that increased cytoplasmic calcium concentrations; and second, it finds that CLL cells are selectively susceptible to death induced by the calcium signaling…”

“Shikonin, a natural naphthoquinone, was used in traditional Chinese medicine for the treatment of different inflammatory diseases and recent studies revealed the anticancer activities of shikonin. We found that shikonin has strong cytotoxic effects on 15 cancer cell lines, including multidrug-resistant cell lines. Transcriptome-wide mRNA expression studies showed that shikonin induced genetic pathways regulating cell cycle, mitochondrial function, levels of reactive oxygen species, and cytoskeletal formation. Taking advantage of the inherent fluorescence of shikonin, we analyzed its uptake and distribution in live cells with high spatial and temporal resolution using flow cytometry and confocal microscopy. Shikonin was specifically accumulated in the mitochondria, and this accumulation was associated with a shikonin-dependent deregulation of cellular Ca2+ and ROS levels. This deregulation led to a breakdown of the mitochondrial membrane potential, dysfunction of microtubules, cell-cycle arrest, and ultimately induction of apoptosis. Seeing as both the metabolism and the structure of mitochondria show marked differences between cancer cells and normal cells, shikonin is a promising candidate for the next generation of chemotherapy”.

“Inhibition of mitochondrial pyruvate dehydrogenase kinase (PDK) by dichloroacetate may be exploited to reverse the abnormal metabolism of cancer cells from glycolysis to glucose oxidation. As PDK negatively regulates pyruvate dehydrogenase, dichloroacetate indirectly stimulates the pyruvate to acetyl-CoA conversion. Dichloroacetate has been shown to downregulate the aberrantly high mitochondrial membrane potential of cancer cells, increase mitochondrial ROS generation and activate K+ channels in malignant, but not in normal cells143. Dichloroacetate also upregulated the expression of the K+ channel Kv1.5, which is often underexpressed by tumour cells, through the transcription factor nuclear factor of activated T cells (NFAT1). Dichloroacetatenormalized mitochondrial functions were accompanied by reduced proliferation, increased apoptosis and suppressed tumour growth without apparent toxicity, suggesting that the mitochondria–NFAT–Kv axis and PDK represent promising anticancer drug targets”.

Watercress has it. So does cauliflower, cabbage, bok choy, broccoli, and brussels sprouts. Phenethyl Isothiocyanate (PEITC) is another powerful, natural anti-cancer compound. It works by manipulating redox status in the cell. Follow the links for some of the research on this powerful glutathione inhibitor.

Update: Follow the link for a nice primer on apoptosis, BCL-2, and BH3 Mimetics.

Dr. Sharman’s CLL & Lymphoma Blog – What is BCL-2 and why should we inhibit it?

“Chronic lymphocytic leukemia (CLL) is characterized by the deregulated accumulation and persistence of B lymphocytes in the blood. Although the exact causes of CLL are unknown, the evasion of apoptosis through aberrant expression of BCL2-family proteins is a common feature. A class of compounds, termed BH3 mimetics, has been developed to directly inhibit BCL2 proteins and selectively kill tumor cells. To date, the most successful of these compounds are the BCL2/BCLXL inhibitors ABT-7372 and ABT-263 (navitoclax), as well as the BCL2-specific inhibitor ABT-199. Results from early clinical trials with navitoclax have demonstrated single-agent efficacy in patients with relapsed or refractory CLL.
However, there was heterogeneity in response rates between patients, and dose-limiting toxicities including thrombocytopenia and neutropenia which prevented further doseescalation.
In addition, CLL cells residing within various microenvironments (e.g. lymph nodes and bone marrow) are resistant to BCL2 inhibitors. This resistance results from the upregulation of additional BCL2-proteins, such as BCLXL, MCL1 and BFL1, the latter two of which are not inhibited by navitoclax, and therefore protect the leukemia cells from apoptosis. Additional drugs are needed to enhance the efficacy of navitoclax. Here, we demonstrate that gossypol overcomes stroma-mediated resistance to ABT-737 without enhancing the sensitivity of normal lymphocytes and platelets.
The BH3-only protein, NOXA, is a potent inhibitor of MCL1 and BFL1, but has recently been recognized to inhibit BCLXL with lower affinity. Therefore, compounds which induce NOXA may inhibit MCL1, BFL1 and BCLXL, thus overcoming resistance to navitoclax. We previously reported that six putative BH3 mimetics do not directly inhibit BCL2 in cells, but instead activate the integrated stress response and induce NOXA. Of these six compounds, gossypol has advanced into clinical trials in a racemically purified form (AT-101).10 We hypothesized that gossypol, through induction of NOXA, would sensitize CLL cells to ABT-737”. Link below: 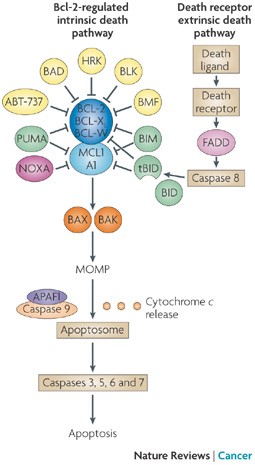 BH3 Mimetics – the road to apotosis

“In mammals, apoptosis occurs through the death receptor (extrinsic) or Bcl-2-regulated (intrinsic or mitochondrial) pathways. The latter is regulated by three subgroups of the Bcl-2 family: the pro-survival members, such as BCL-2 or MCL1, the pro-apoptotic BAX and Bcl-2 homologous killer (BAK) subgroup and the pro-apoptotic BCL-2 homology domain 3 (BH3)-only proteins, such as BIM (also known as BCL2L11) and PUMA (also known as BBC3). Apoptotic stimuli cause transcriptional and/or post-translational activation of specific BH3-only proteins, which then engage and sequester the pro-survival Bcl-2 family members, thereby liberating the downstream effectors, BAX and BAK, which elicit mitochondrial outer membrane permeabilization (MOMP) and unleash the caspase cascade, culminating in cell demolition. It has also been proposed that at least some BH3-only proteins, in particular BIM and BID, can directly activate BAX and BAK (not shown). Some BH3-only proteins (shown in green), such as BIM and PUMA, can bind and sequester all anti-apoptotic Bcl-2 family members with high affinity and are thus potent killers, whereas others (shown in yellow and dark pink), such as Bcl-2 antagonist of cell death (BAD) and NOXA (also known as PMAIP1), bind only certain anti-apoptotic members (BAD binds BCL-2, BCL-XL and BCL-W (dark blue), whereas NOXA binds only MCL1 and A1 (light blue)). Thus, the efficiency of cell killing is determined by the relative levels of pro- and anti-apoptotic members. ABT-737, a BH3-mimetic, has a similar binding profile to the BH3-only protein BAD. APAF1, apoptotic protease-activating factor 1; BMF, Bcl-2-modifying factor; HRK, activator of apoptosis harakiri; tBID, truncated BID.”

Apoptosis: from biology to therapeutic targeting

Methyl Jasmonate is a plant stress hormone that has significant anti-cancer properties. So how does MJ work? Let me count the ways. It arrests cell cycle, inhibiting cell growth and proliferation; causes cell death through the intrinsic/extrinsic pro-apoptotic, p53-independent apoptotic, and non-apoptotic (necrosis) pathways; detaches hexokinase from the voltage-dependent anion channel, dissociating glycolytic and mitochondrial functions, decreasing the mitochondrial membrane potential, favoring cytochrome c release and ATP depletion, activating pro-apoptotic and inactivating anti-apoptotic proteins; induces reactive oxygen species mediated responses; stimulates MAPK-stress signaling and redifferentiation in leukemia cells; inhibits overexpressed pro-inflammatory enzymes in cancer cells such as aldo-keto reductase 1 and 5-lipoxygenase; inhibits cell migration and shows antiangiogenic and anti-metastatic activities. The complete lack of toxicity to normal cells and the rapidity by which MJ causes damage to cancer cells, turns MJ into a promising anticancer agent that can be used alone or in combination with other agents. 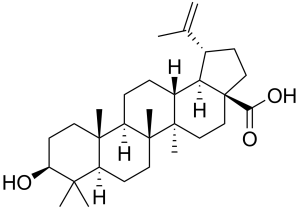 Betulinic acid (3β, hydroxy-lup-20(29)-en-28-oic acid) is a pentacyclic triterpenoid of plant origin that is widely distributed in the plant kingdom throughout the world. It is known for its antiretroviral, antimalarial, anti-inflammatory, and anti-cancer properties and has been used in folk medicine for a variety of ailments.

Here are a few links to the relevant research:

Betulinic acid as a potent and complex antitumor phytochemical: a minireview (abstract only)